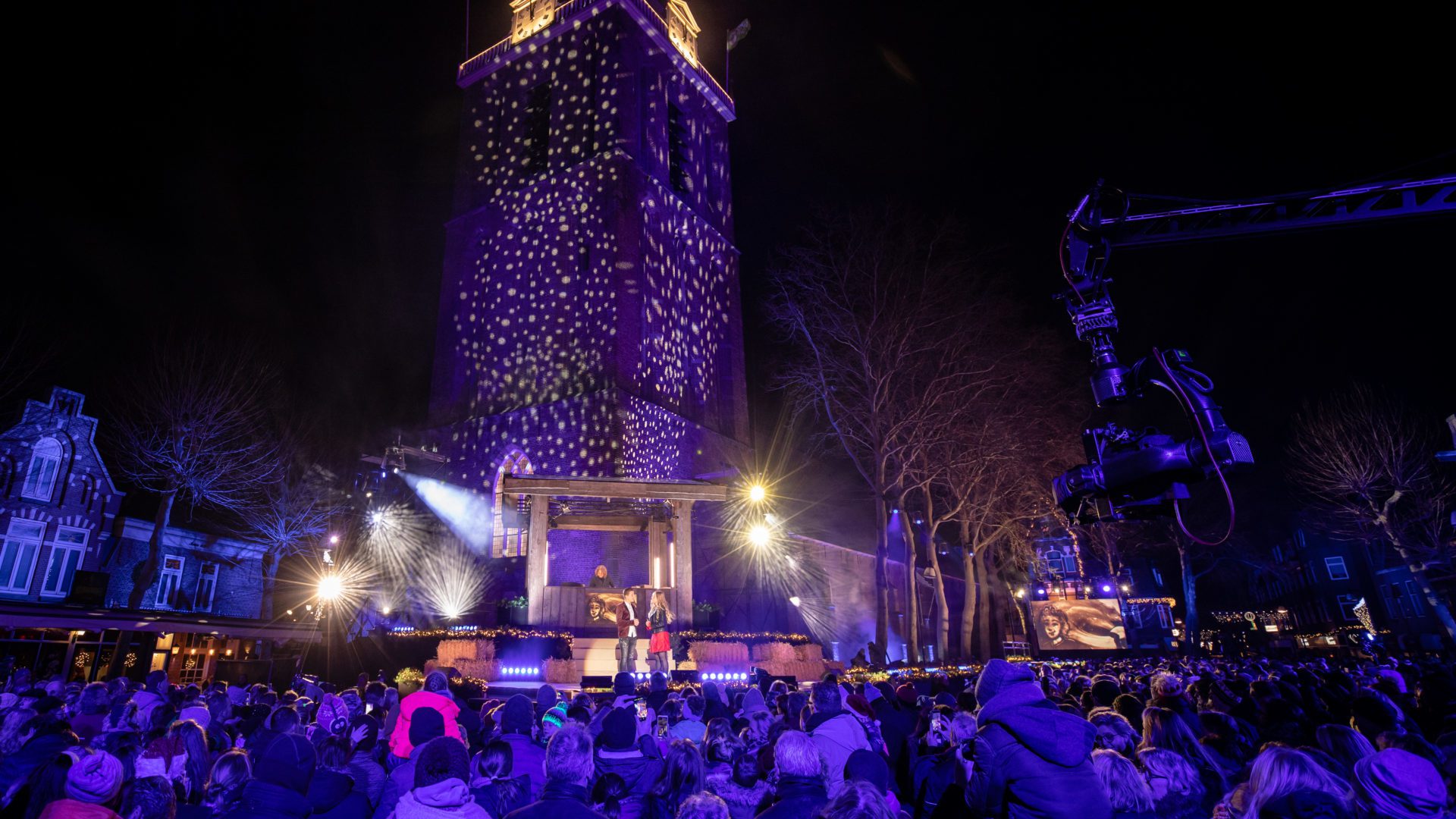 The yearly event called Christmas with the Sand Wizard (in Dutch: Kerst met de Zandtovenaar) is a project of The Media Brothers commissioned by Dutch broadcasting company KRO-NCRV. Livetime Productions / Unlimited Productions has been technical producer for this event. This specific project is a nice challenge for our crew in more than one way. Producing a live event and recording it for television, requires a special approach from the technical producers.

Combination of live and television
This year the event took place in the Dutch city of Meppel. Thousands of people come to a decorated city square to listen to the Christmas story narrated by several Dutch celebrities. This story is accompanied by artwork drawn live in sand by the so-called Sand Wizard Gert van der Vijver, which is then projected on several screens across the square. This live event is recorded and broadcasted on national television by KRO-NCRV.

Job van der Meer, account manager for this event, explains: “The challenge at this production lies in the fact that it is a combination of a live event and a recording for television broadcast. This means there is a limited timeframe for the show. For example, for a perfect broadcast you sometimes need to re-record certain parts of the show. If that happens too often, the audience will lose its attention. There is even a chance of people leaving the square. The production team will do everything in its power to keep the audience entertained and the recordings smooth at all times.”

Pre-production
The technical production starts with a site visit with all relevant parties. Subsequently the director presents his ideas to the producers via an animation, in which he simulates amongst others the desired camera angles and effects. The technical producer plays an important advisory role in this process. After all, he knows best which images are technically achievable and which equipment should be used to accomplish the desired effects.

After the presentation of the visual, the account manager starts the pre-production process together with production managers and technicians. All details and elements are being incorporated in a technical drawing, such as audio and light equipment, as well as the position of cameras and screens. The production team tries to preserve the creative view of the director as much as possible, but sometimes concessions have to be made. Obviously all involved parties all have their own interests. For the director the creative aspect is leading, for the client there also is a financial factor to be taken into account. The role of the technical producer is to incorporate the requests of each party into a technically and economically feasible plan.

Construction process
Upon obtaining all necessary approvals and licenses it is time for construction, starting with the load-in on day one. The location is fenced off from the public and all materials are brought on site. This production site lies in the middle of the city center, which makes the load-in a logistical challenge. The shops and restaurants around the square have to use the same supply route, so good communication between all involved parties is key for a smooth load-in.

An extra challenge in this particular project is the unpredictable number of spectators. This is a public event, which is accessible free of charge. The number of people allowed on the square during this event is limited, mainly for safety reasons. Therefore there is a second screen on a square close by, where the show is displayed via a live stream.

On day three the main construction is finalized and the construction site transforms into a proper production site. On the evening of day three technicians start programming and testing all light and sound equipment.

Showtime
The show is on day four of the production. On this day all cameras are being installed and camera rehearsals take place. Job van der Meer: “Our crew observes the test images on a separate screen, to establish if all equipment is positioned according to plan and if it is working properly. No cables, amplifiers or construction materials may be visible on screen. All camera positions and images are calculated very precisely, so one has to be careful not to move or add any equipment from that moment onwards.”

This production is all about details. Advertisements and neon signs of surrounding establishments have to be avoided on camera images. Also street lighting has to be switched off at a certain time and even the church bells have to be put on hold. The technical producer is able to incorporate all these elements into a detailed comprehensive plan.

During the live show the director takes over. However, a team of ten to fifteen crewmembers is in standby mode to be able to act promptly when unforeseen problems arise. Job van der Meer: “The live show and recordings went down very smoothly mostly due to good communication between all parties, the great weather and even better audience in Meppel. We can look back on a wonderful event and another successful technical production!”