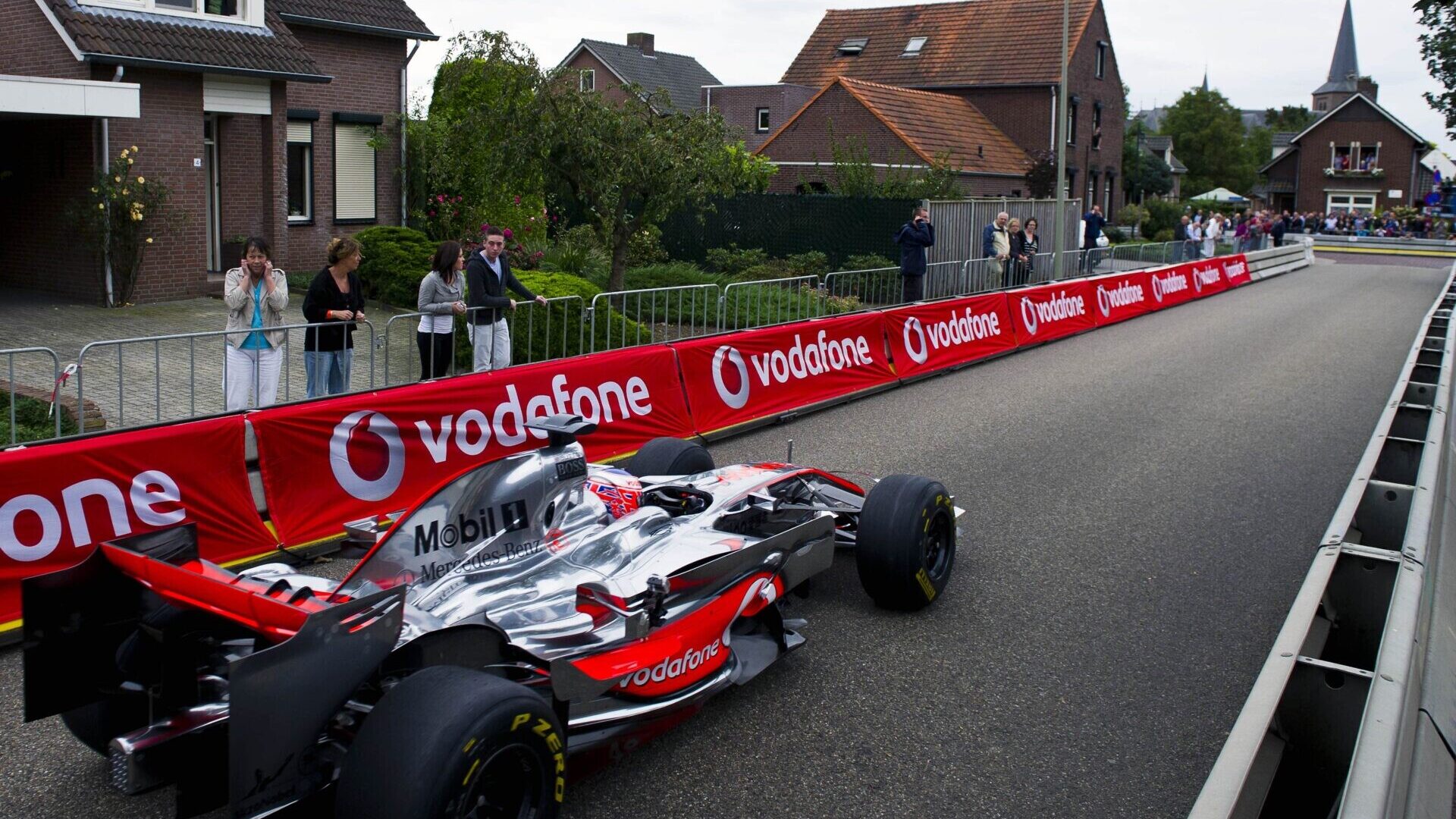 In the upcoming blog series, we’ll be highlighting a selection of our productions at unique locations. Each time we will feature a different, special location. This week we share the second article in the series. Exactly 11 years ago, we provided the production for The Vodafone Grand Prix 2011 in Roggel in the south of The Netherlands. In this article, we will tell you everything about this production.

Grand Prix Roggel 2011 took place in a small, picturesque village named ‘Roggel’ in Limburg, The Netherlands. Only a few thousand people live in Roggel and there is just one main road (N279) going through the village. The main road is the only route from one side of the village to the other. Commissioned by DNA Events (MCI Amsterdam nowadays) and Vodafone, we were able to supply and produce an impressive event to expose their new fiber optic line at the time. They suggested racing on the road through this small village to make a statement with their campaign. Concurrently, they thought it was funny to find out whether a Formula 1 car would be faster in speed than the connection of the new fiber optic network, and that’s how the Grand Prix of Roggel was born!

‘’The speed of the race cars, setting up the entire circuit, dealing with bad weather scenarios, closing roads and all emergency and crowd control was a challenge for us. However, it gave us goosebumps! We can look back at an impressive spectacle.’’
Bart Roelen | Managing Director

Bart Roelen, our Managing Director, was overall responsible for this project together with production managers Thomas Isarin and Mark van Loenhout. We had an interview with Bart to find out more!

What was the biggest challenge of this project?
The biggest challenge was the location, for sure! Racing a few kilometers in a Formula 1 car through this historical small village in Limburg with approximately 4 to 5 thousand inhabitants meant that we had to fence the entire village, including barriers and guardrails in order to create a safe environment. Not only for the residents, but also for transients and visitors. You can imagine that we have faced quite a challenge here.

How did you cope with these challenges in pre-production and on-site?
Many site visits and collaborations with locals were key for this project. At least once every two weeks we had a site visit and we went for coffee and conversations with local suppliers and residents. We had to become ‘friends’ with all local parties, including catering, bakery, police, fire brigade, the Mayor and City Council members. Only by working together we could make this project a success.

In a project like this, it’s all about looking at the possibilities. We make productions as efficient as possible by using the available facilities in the environment. Near the ‘circuit’ was a holiday resort and a large parking area where we established our production site. Here we stored our materials, machinery and crew supplies. As you might understand, not every ‘average’ road is suitable for F1 cars. With the speed of almost 300 km/h, the sound and heat of these cars, new asphalt and routing was needed for the race. This meant that the entire infrastructure had to be adapted. In collaboration with the Mayor, City Council members and all other authorities, we made sure the event could be conducted in the safest possible manner.

What else did you run into?
All access roads had to be diverted except for a few walking routes. Because everything had to be fenced, all residents who live near the circuit were impeded in transportation. For example, they couldn’t easily reach their own front door and driving to work and to the supermarket had become more difficult. The traffic flow of residents and visitors through the village was partly solved by the construction of walkways. Unfortunately, wheelchairs could not easily cross these bridges, but they could call us for assistance. Besides, visitor passes were required for residents to cross the village. This way we were able to lift some restrictions, but there will always remain obstacles. In addition, a safety plan had to be formed. Questions such as: ‘What if there is a fire?’ or ‘What if an ambulance is called to the village?’ had to be answered. The safety policy must be strict and clear for everyone involved. That also meant that the routes must be adapted to these circumstances and the traffic flow must remain safe. During the event, a helicopter flew above the F1 circuit to observe where the car was driving and which external conditions we had to deal with.

Despite everything, the residents felt extremely involved and enthusiastic. Let’s be honest, when will you experience a real Formula 1 race as close to your home as this? That’s right! This was a ‘once in a lifetime’-chance to experience such a spectacle of this size.

What did you like about this production?
The combination of producing a great, unique event in a historical village and the speed of the Formula 1 car with F1 Champion, Jenson Button, was just priceless. As the project manager at the time, I really loved working for months, day and night on this project. It gives you an unbelievable amount of energy! All the adrenaline makes you almost feel euphoric. The speed of the race cars, setting up the entire circuit, dealing with bad weather scenarios, closing roads and all emergency and crowd control was a challenge for us. That’s what we like, challenges and to think in solutions, not in problems. However, it gave us goosebumps! We can look back at an impressive spectacle. Working together with a team of highly-skilled, experienced and motivated event professionals made the project a big success.

Name the successes that have been achieved.
The biggest success is the bond of trust or the ‘friendship’ which we’ve achieved with the local residents and everyone involved. Like I said before, during production, all residents were hesitant at first. We had to avoid suspicion among the residents and keep them excited about this event, because they envisioned all the disadvantages and obstacles in advance. However, after many conversations and explanations, local residents were particularly proud and impressed. For example, they waved at us as we passed with forklifts and trucks during the operation. This made me feel very proud and satisfied. All the bonds we made with citizens and visitors, and the collaboration with the one and only F1 champion Jenson Button, made this project very exciting. You never get the chance to drive a race car in such a small village as Roggel. The fact that we managed to convert a village like this into a complete racetrack, and that the event was such a success, is really spectacular. It isn’t an everyday happening. Vodafone had opted for this event as their activation strategy to leave an impact, and it sure did!