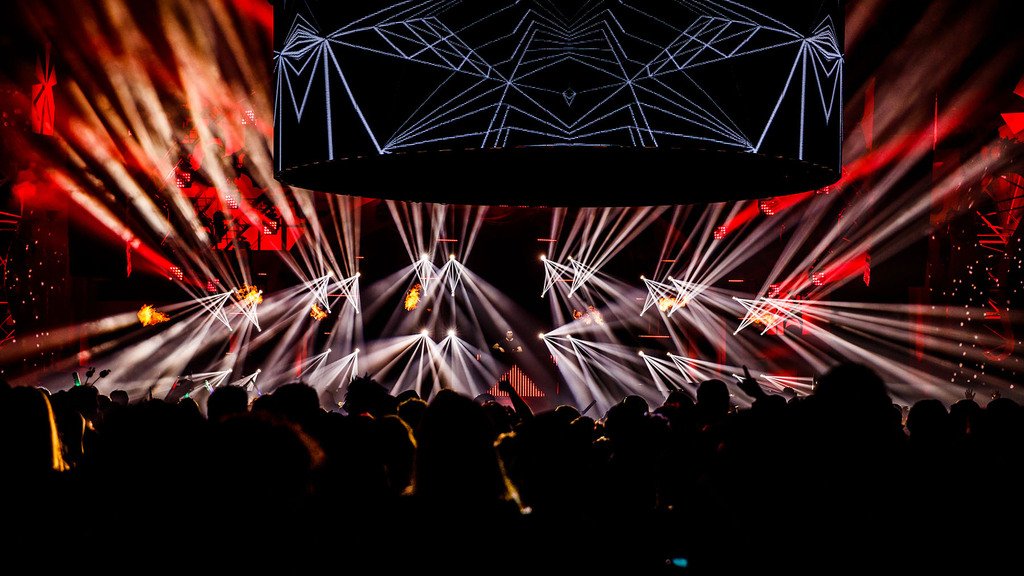 Technical producer Bert Kelchtermans was interviewed about his choice on ROBE Lighting for a corporate event in the RAI Amsterdam earlier this year. Read the interview here.

Seven halls of Amsterdam’s RAI expo centre hosted an annual two day event for a well-known brand. The technical production – lighting, audio, video, rigging and special FX – for all areas was delivered by Breda based Unlimited Productions B.V., who sourced over 600 Robe moving lights for the occasion!

Several lighting designers were involved, working under the supervision of Unlimited Productions across the different areas with their own Bert Kelchtermans designing the general plenary session in Hall 8 for 7000 people.

Michel Suk lit the three food halls and two smaller presentation spaces, while André Beekmans from The Art of Light, well known for his work with EDM superstars like Armin van Buuren and Hardwell, plus renowned dance music LD Ronnie Santegoeds from 4Light put creativity and flair into ensuring the party area was a memorable and fun visual experience.

Bert works full time for premium corporate / public event specialist Unlimited Productions founded in 2009, which has produced this event together with event agency MCI Amsterdam for seven years. For this edition, MCI was responsible for the concept of the food lounges and party area. Each year the event has grown and become more technically ambitious!

The technical brief for the general / plenary session was to help energize and involve the crowd fully so they felt part of what was happening – rather than passively sitting and listening to a string of presentations! Central to the design was the utilization of some arena concert style lighting techniques to ensure that everyone felt physically close to the stage and had excellent views of the presenters.

A 60 metre central stage was constructed in the middle of the room with audience on all sides.

The client also requested that the multi-camera live shoot should be able to get great crowd shots from every angle, so in addition to plenty of show / stage lighting, Bert made sure that the audience and the complete area were well lit.

A network of trusses was installed in the roof on which over 350 Robes were installed – a combination of Spiiders, Spikies, BMFL Spots and WashBeams, DL7S Profiles, Pointes, LED Beam 1000s and LEDWash 300s.

Above the stage, nine ‘blocks’ were flown to bring some architecture into the space. Four of these were two-sided projection cubes, complemented by the other five which introduced a set /décor vibe that was also practical in that they concealed subs, PA amplifier positions and other technical infrastructure that needed to be kept out of sight.

Under each of these five ‘deco’ blocks, eight Robe Spiider LED wash-beam fixtures were rigged, selected as a powerful LED wash with a small footprint, needed due to the limited height and space available for rigging any lights.

Bert also needed lights with excellent colour mixing so they could work as extra front key lighting on presenters. Spiiders also had the additional bonus of the smaller breakup ‘moonflower’ effect from the central LED which was perfect for specials.

A total of 48 Spiiders were used, 40 on the deco cubes and eight more for backlight on a DJ playing on day 1 and an orchestra on day 2.

The 24 x BMFL Spots were rigged on a truss in the centre of the four video screen cubes, above the stage, positioned so most of the unit was concealed, with only the lenses poking out of the bottom of the cube.

The reason Bert chose these was simple – “even though they were only 4.5 metres above the stage, the zoom is so amazing and we could cover the entire stage!” The great dimming curve also made it easy to balance BMFLs for camera. “It is one of the best spots on the market right now,” confirmed Bert.

Twenty-four BMFL WashBeams were hung on the main grid above the video screens / decor cubes. Bert wanted a really punchy, intense bright light to create great waves of aerial effects over the audience to ramp up the energy. He also needed to prevent light spill on the projection surfaces, so the framing system was very useful.

The 16 x LEDBeam 1000s were positioned adjacent to the BMFL WashBeams and used for augmenting the aerial effects. Due to their stunning output, they were also used as LED strobes above the crowd.

Sixteen of the 28 x DL7S profiles on the rig were used as moving front lights and specials, with eight on the stage deck for floor specials. “This luminaire is packed with functionality” comments Bert, “and it looks great on camera mixing with the primarily conventional front lights”.

Above the audience stretching right across the arena was a matrix of 126 smaller deco cubes which greatly boosted the dynamics of the space. In between Bert wanted a fixture with good output, that could produce a beam when needed and also a nice breakup gobo effect, and Robe’s Pointe ticked all these boxes! He created a 48-Pointe matrix either side of stage – 96 Pointes in total. “It’s a lightweight and hugely diverse fixture,” he says. To have these banks of lights sitting both sides of the stage greatly increased the background and depth on both sides.

The 96 x LEDWash 300s were dotted around the ceiling above the audience to add a nice general colour fill.

When he started the original lighting plot, Bert did not ever think he’d end up using this many Robe lights just for the general session!

But the brief was ambitious and the goals were set high. He knew – from the size of the room and audience – that he needed the power of the BMFLs and punch and multi-functional effectiveness of the Pointes – but it was only when he started drilling down further into the design that he realised he needed to add Spiiders for detailed work and LEDWash 300s for animated and rich audience coverage.

This scenario was totally different from a standard conference set up, where the focus is very much on the stage action.

“Last but not least” he explained, the 48 x Spikies were on low-hangers (drop arms) all the way around the room, about half way up the floor-to-ceiling perimeter drapes … a genius touch that neatly avoided any black holes in camera shots.

“Its super low weight made it incredibly easy to rig,” said Bert of the Spikie. He loves the fact that it is so much more than just a standard beam and was surprised with the way the 60W LED light source can keep pace with the many Pointes above the crowd.

Mostly the Spikies were used with the prism effect, maintaining a good output but looking that bit more interesting than just a bright beam!

All of these lights in the general session were controlled by 2 grandMA2 consoles which were programmed and operated by Serge Patist (Lighting director) and Thomas de Vries (Operator) from Live Legends.

For the Party Area in Hall 12 Andre and Ronnie specified 198 x Pointes and 20 x LEDWash 800s, which were operated by Andre himself and Micky Dordregter.

The Robe kit was supplied by a combination of two main rental companies, Ampco Flashlight Rental from Utrecht and Rent-All from Bemmel. Sourcing that many lights in itself was quite a challenge during a busy start of the year. Ampco has recently invested in Spiiders and some of these arrived on site straight from the Robe factory in the Czech Republic.

Bert has been using Robe in his designs since 2103, when the award winning, best-selling Pointe was launched and became an iconic must-have rental item throughout Europe. Since then, he has seen the brand grow and grow.

“The LEDWash and Beam series are really good and with BMFL added to the line-up, Robe really does have a light for every application and occasion” he states, adding “Robe is a market leader right now with an already excellent range that keeps developing constantly”.